Studio 47 is a small, unpretentious and nimble-footed production company. We eschew bigger productions for smarter ones to help tell the story behind your small business. We think that your customers shouldn’t just know what you do but WHY you do it and WHY they should seek you out.

“The Story’s the Thing.”

Turns out, most everyone has a story, whether they know it or not, and they’re almost always damn interesting! In the case of individuals or small businesses you’re knowledgeable and passionate about what you do, but often the communication of these ideas is where you might need a hand. Leave it to us! We love to translate your passion into exciting and insightful narratives; the introduction of your product or idea, your process documentation, even a call to arms! Even you may be surprised at how strong your message really is.

We want to help you discover your story and use great video to spread its word! So take a look at some of the projects we’ve done for others and drop us a line. We’d love to hear what you’ve got cooking.

The Idea of No-Waste Filmmaking

Being from Portland, Oregon I can’t help but be influenced by ecological mindset of the Pacific Northwest. It wasn’t long before these values started emerging in my filmmaking approach and I was surprised at how well they translated to both my efforts and my clients’ needs.

“Simple is a virtue.”

Film and video has traditionally been a very expensive endeavor because of the specialized equipment necessary to create it. However, thanks to the shift from film to digital space, we can now often create equally compelling imagery with unspecialized equipment with very little in the way of compromise.

This is awesome for people who make video and for those who need video. 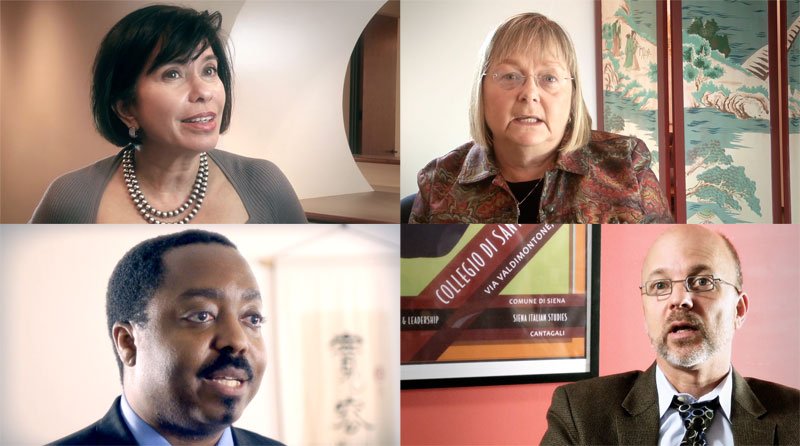 Take these shots from a couple of interviews I did for a few different projects as an example. Plenty of light, soft shadows, a bit of light in their hair to help separate them from the background. They look pretty good, right? 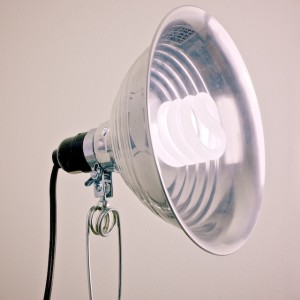 They were lit 100% with a set of these, basic work lights from a hardware store with daylight-temperature CFL bulbs. Conventional wisdom is that you’d want a set of bulky, high-powered halogen lights to throw as much light around the scene as possible, yet I was able to do it this way instead because I considered:

•the performance of my cameras (which don’t care where the light comes from, just that there’s enough of it)

•the techniques of how to light a person (which hold true regardless of what’s producing the light).

I was able to save my client money, create a kit that I can carry and set up myself in a very short amount of time and still create a dynamic and attractive image. There’s other benefits, too: CFL bulbs run cooler, which means a more comfortable shoot for everybody. And they put out a great amount of light for a low power cost. (I’ve since moved on to LED lighting which has all the same benefits but tends to be much more sturdy.)

This is one example of what is at the heart of our philosophy of “No-Waste Filmmaking.” It’s not about cutting corners, it’s about leaving out the extra corner of a square when the three corners of a triangle are really all you need.

Sometime in Junior High, I found and started playing with the Yashica camera my Dad had with him in Vietnam. Warm fuzzy feelings for photography started then. Star Wars and ninja flicks prompted me to learn for myself that making movies could be as fun as watching them. Attending the hands-on film program at Montana State University gave me a strong foundation in the “making them” department.

For over 5 years I worked with a range of passionate individuals and businesses to create visual stories that help build their brand and their message by not just telling viewers what they do but why they do it.

Recentlly, I moved back to Japan with my wife, where I continue to hand-craft moving images for people with stories that need telling.

There was a period of about six months in my life back in High School when 47 was stalking me everywhere! It was crazy, every time I looked at the clock, it was 47 minutes past the hour. Check the odometer, it ended in 47. Looked out the window and saw my brother in his soccer jersey…which happened to be number 47. It really felt to be beyond what you would expect the normal odds of seeing any given number would be. I even tried to notice other numbers, acknowledging that perhaps it was just all in my head, but 47 kept right on popping up left, right and center.

Then all of a sudden it stopped. There didn’t seem to be any catalyst, I just noticed that it wasn’t there all the time. I don’t know that it meant anything or if it even existed in the first place. But there was something neat about the atmosphere when I was seeing that number everywhere. It felt like something important might happen at any moment and then its mysterious meaning would suddenly be made clear.

I suppose that’s the feeling I’m chasing whenever I compose a photo or sit down to edit a video. Knowing that I’m starting with something “out there” and trying to sift out some secret it guards by sifting it’s context through myself, my lens and my computer. Also, if I just used scottpiekarczyk.com, I’d probably never get any visitors; that is not an easy name to remember, much less spell right. 😉